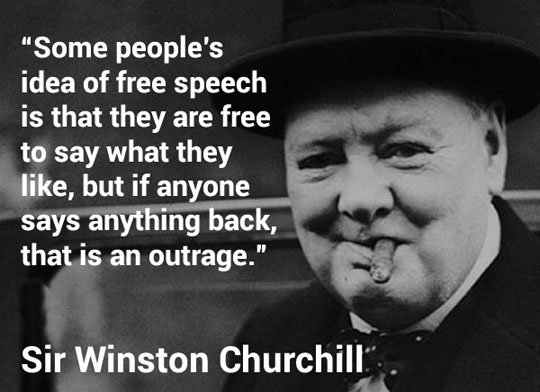 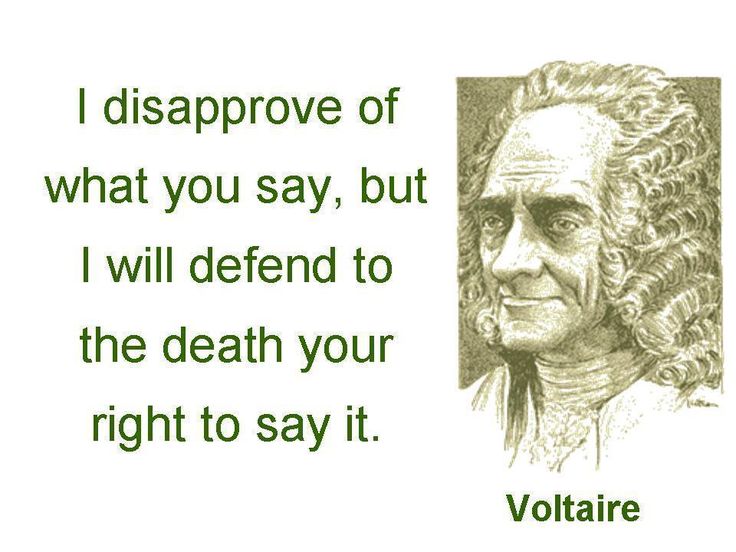 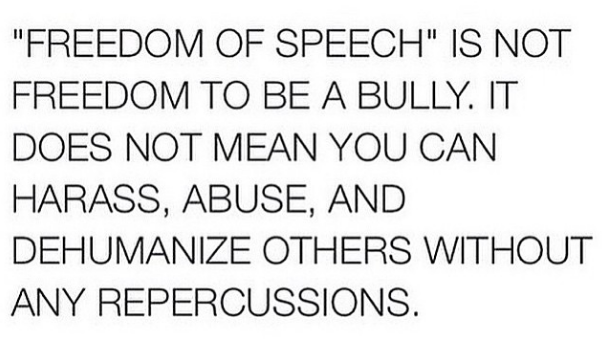 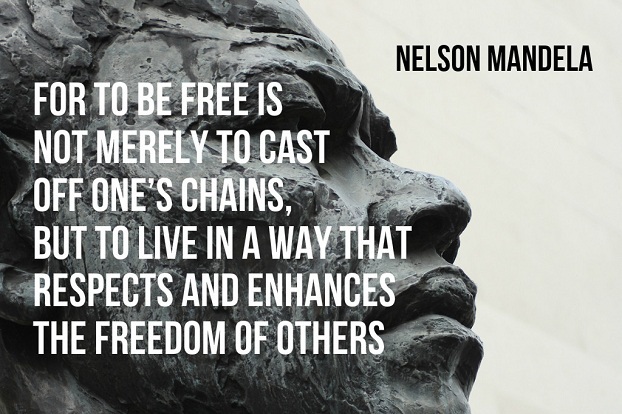 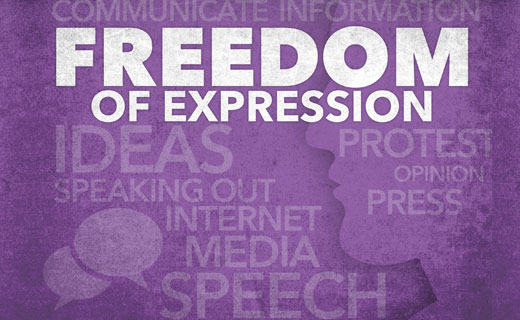 Last week while I was doing research for an article on A.I and Advanced Robotics, I came across a very interesting phenomenon called The Mandela Effect. As it turns out The Mandela Effect has been all the rage, especially on YouTube, and has people going somewhat berserk for the past 2-2.5 years.

The Mandela Effect has been defined as the collective misremembering (confabulation) of details or events by a large group of unconnected people. The term Mandela Effect was coined by a paranormal researcher by the name of Fiona Broome after the rather peculiar instance, where many people around the world seemed to have an erroneous recollection of Nelson Mandela dying in prison in the mid-1980s when he actually died on December 5th, 2013. This “effect” has snowballed in popularity since then, as people began to find further examples of subtle and not so subtle changes in brand names and logos, historical events and cultural memes such as iconic quotes and lines from popular films, songs and books. For people who regularly misplace car keys, glasses etc. this may not seem so uncommon but there is much more to this than meets the eye as I found out when I started looking into this.

What first piqued my interest is the fact that The Mandela Effect has been dismissed offhand by many (and the mainstream media of course!) as a collective failure of memory. Not only did I find this somewhat implausible but if you, like I, have read the Holographic Universe by Michael Talbot you will be familiar with the experiments that were done by quantum physicist Karl Pribram, in his attempt to find out how and where memories are stored in the brain. It is generally believed that each memory a person has is in a specific location somewhere in the brain cells. These memory traces are called engrams and scientists believe that it is only a matter of time before they will be found. It goes beyond the scope of this article to go into details about Pribram's findings (read the book if you are really interested), but suffice it to say that if it hasn't been established with any level of certainty where and how memories are stored in the human brain, the phenomenon described as the Mandela Effect cannot be brushed off as a simple "global lapse in recall".

The number of effects that have been reported has reached such an extreme that they have ordinary, everyday people who are not into quantum physics and/or string theory at all talking about multiple dimensions, shifts to parallel universes and other realities, changes in timelines and timelines merging, time travel and the like. This is quite extraordinary in itself if you ask me. Some people also believe that the Mandela Effect is being caused by scientists at CERN who are somehow messing with space-time which is of course almost impossible to prove. Before going off the deep end let's not forget that quite a few of the Mandela Effects that have been reported can probably be explained, by companies changing branding and logos, misspelling and misquotations, different versions of popular films, songs or books, or even Photoshopping and video editing internet trolls. I simply don't have the time to dive into all of these claims since there are so many, but since I have a curious and open mind (and like quantum physics) I didn't roll my eyes in disbelief and blame the Mandela Effect on "the overactive imagination of tinfoil hat wearing YouTubers". [..as you may have done ;-)]

The rule of thumb that I used while evaluating instances of the Mandela Effect is can this particular example be explained as NOT being caused by a change in logo, misspelling/misquotation/different version etc. etc. beyond a reasonable doubt. (yes, because I went to Law school but decided on a different career path before finishing my degree)

And boy, oh boy did my deep dive pay off.

There are many, many Mandela Effects that have people thinking that they are going crazy and some of the most infamous (as far as I can tell) are:

– What used to be called The Berenstein Bears is now apparently called The Berenstain Bears, with no residue that The Berenstein Bears ever existed to be found in mainstream sources. I'm not familiar with these children's books so I really can't speak to that.
– Darth Vader apparently never said "Luke, I am your father" in "The Empire Strikes Back" but "No, I am your father". This phrase has apparently changed itself on every DVD and online clip of this scene. I didn't buy the Star Wars DVD's so, again, I can't vouch for that but the phrase "Luke, I am your father" does seem to be changed when watching several random online clips.
– The phrase "of the world" was apparently never part of the original and extremely popular song "We are the champions" by the rock band Queen. It is still on live recordings online but seems to have vanished from all original recordings. Again, I don't own any Queen cd's but check it out for yourself if you have copy that has this song. Let me know if it still has the "of the world" line at the ending and I'll update the article.

But here's the kicker.

The fourth most infamous Mandela Effect that I want to list here has to do with one of the most iconic movie quotes EVER, namely, "Life is like a box of chocolates" from the movie Forrest Gump. This one was reported by many as a Mandela Effect as the line seems to have changed on DVD's and (get this) even VHS tapes to "Life was like a box of chocolates".

Since I think Forrest Gump is one of the cutest movies ever made I have a copy at home and the first thing I thought when I watched this change online was "…well, this one is clearly incorrect and weird. Paramount Pictures licensed millions upon millions of items of Forrest Gump merchandise to plaster this phrase all over the planet, so it wouldn't even make business sense to change it to "Life was like a box of chocolates" as it would make the Forrest Gump paraphernalia kind of useless.

Fasten your seatbelt for what's next.

I took out my Forrest Gump DVD and, yes indeed, on the back cover is printed clear as day, "Life is like a box of chocolates…." in English and "La vie c'est comme une boîte de chocolates…" in French. While thinking, ….there it is, case closed…, I put the DVD in my laptop anyway just to be absolutely sure and lo and behold the line that came out in the movie was "Life WAS like a box of chocolates".

Now THAT got my attention. 🙂

This is a photo that I took of the back cover of my Forrest Gump DVD. 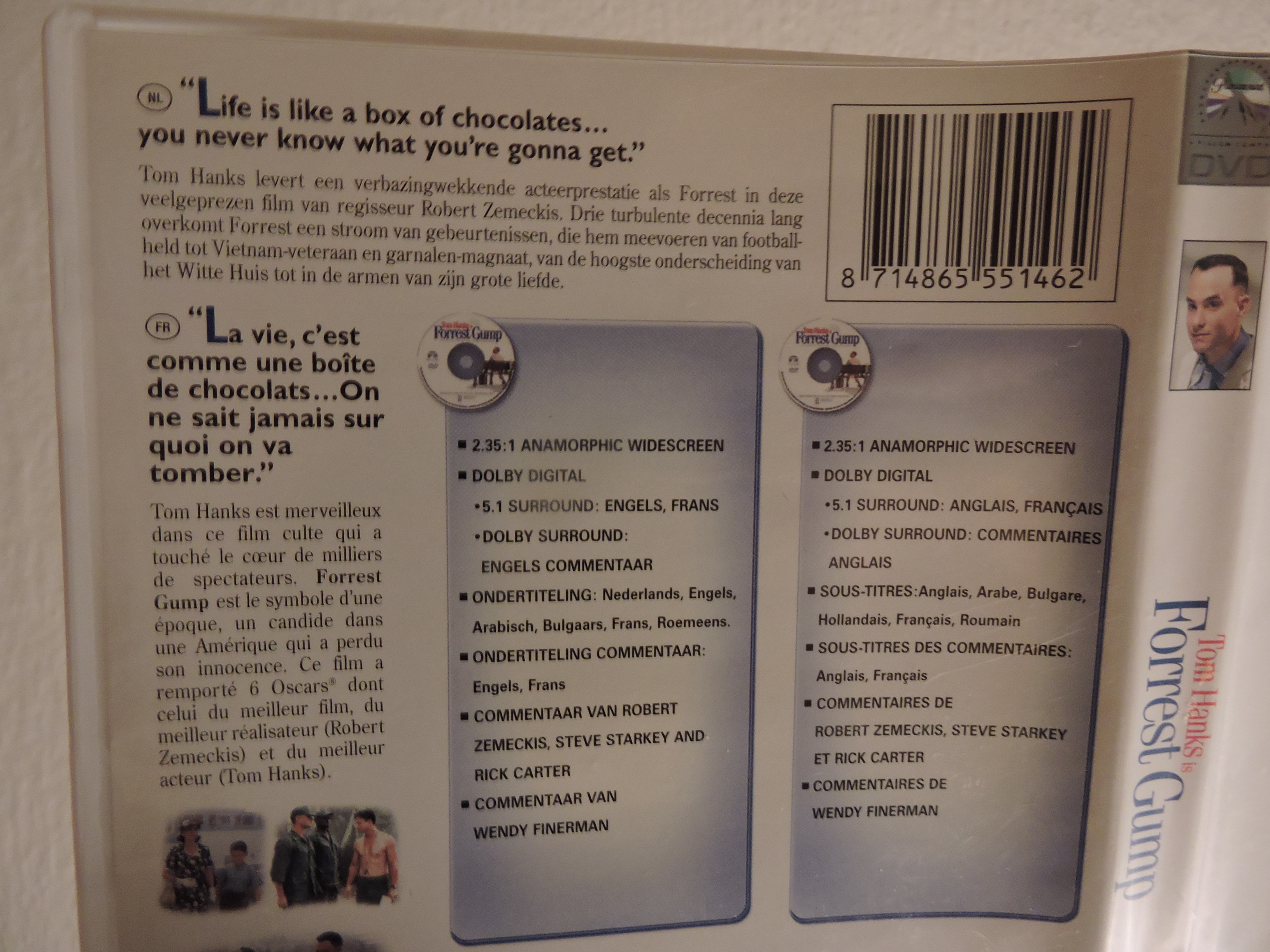 The 3 videos below were included in the first playlist but I re-uploaded them, as the YouTube accounts they originally came from have been removed. It goes without saying that you should pay extra attention to, and do your own research on videos with topics that are removed en masse from YouTube and other social media platforms. 🙂

The first video in the playlist below is a screen recording of the DVD in which I show the "Life is like a box of chocolates" clip with 3 different subtitles running. While the English subtitles show "…was like a box of chocolates as the character Forrest Gump says "……was like a box of chocolates", the translation in both French and Dutch remains "….Life is like a box of chocolates even though the character is saying "…was like a box of chocolates" i.e. in past tense. The DVD that I own also has Arabic, Bulgarian and Romanian subtitles but I only checked the languages that I have a native (Dutch and English) or basic to intermediary (French) command of. The other videos in the playlist are other reported cases of the Mandela Effect which are quite interesting to watch if this is the first time that you've heard about this. What I also found out is that there is a movie coming out in 2018 (it's currently in post production) called The Mandela Effect which is based on the phenomenon I just described. This movie could simply be an attempt to invalidate the claims that have been made or perhaps even confirm them but whatever the reasons, someone is investing their money in taking this effect to the mainstream. (or just capitalizing on the phenomenon's popularity). See: The Mandela Effect Set For Big Screen Treatment on Indiewire.com

After having watched the videos above you may wonder if there is any scientific basis for all this and the answer is YES there is, but you will have to familiarize yourself with the basic concepts of quantum physics and string theory if you aren't already familiar with them. At the very least you should watch The Elegant Universe first before going to the videos below if you are a quantum mechanics/string theory newbie.

Please watch the entire playlist below with full attention if you really want to have a deeper understanding of some of the principles that may or may not lie behind the Mandela Effect.

There are a few additional resources that you can keep track of, if you would like to stay up to date about the developments regarding the Mandela Effect. I will list some of them here and you can of course do your own exploration online.