This is a very good presentation by Mark Devlin, in which he shows in great detail how Satanic and Illuminati symbolism are used in the entertainment industry. If you are new to the site, it's best to watch this short clip first: Illuminati Symbolism – It’s Everywhere!

As bad as the lockdown has been (and will be if it's reinstated to "sell the second wave"), it's also the ONLY way in which it would have been possible to wake-up a significant portion of the global population to what's really happening in the world. The Satanic psychopaths may very well be digging their own graves by doing it again, but the Battle of the Century isn't over yet so stay sharp!

In his presentation Mark Devlin mentions predictive programming and I want to elaborate on that, as it was also done with "COVID-19" in a HUGE way. Again, if you're new to the site some reading is required for a better understanding: Mind Control Theories And Techniques Used By The Mass Media

The presentation below about predictive programming is also very good, but it might be too advanced for "newbies" as it mentions Universal/Natural Law, The Mandela Effect and retrocausality, which you probably won't understand if you don't know anything about quantum theory. You can watch the highlighted videos if you want to dig deeper after you've seen the presentation.

Predictive Programming Is More Than What We Thought

SO, how was predictive programming used for "COVID-19" you ask? The opening ceremony of the 2012 Olympics in London was a predictive programming exercise for "COVID-19". Ask yourself, with the knowledge you have now, what all the things you are about to see have to do with a sporting event on that scale. I'll tell you in case you can't figure it out: if you want to pull off a fake pandemic, you need another global event to reach as many people as possible to plant the idea "that they've seen this before somewhere", so the public's mind quickly switches to "I saw it before so it must be real and it must be possible and it must be true" when the bogus scenario is presented. What better event than the Olympics to reach a massive global audience.

Notice how much attention is paid to terrorizing children!, which is related to this article that I posted on July 20th: The REAL Pandemic Part 2 of 2: Missing Children, Pedophilia and Child Sex Trafficking. The ceremony actually ends with people standing around what seems to be a depiction of a dismembered body of a baby.

The maker of this video also commented, as I did in the above mentioned article, that the people behind "COVID-19" will be coming for the children next. They've been called out by several researchers now, which could prevent this from happening, but I strongly advise you to stay very vigilant if you are a parent.

If you are someone who still believes the government's version of "COVID-19", ask yourself where you will draw the line for what you go along with. I mentioned that before in this article Worldwide Anti-Lockdown & Social Distancing Protests.

How much further does the current global situation have to deteriorate before you say NO?

Do you now understand why so many people were saying they had a distinct feeling that they were watching a movie when "COVID-19" started playing out globally? Because that's how they were pre-programmed to accept "COVID-19" – through movies and television.

I really don't give a rat's a^^ about being called "a conspiracy theorist". Show me your research to prove me wrong and if you can't it's time for you to shut up. The train to Wake The Bleep Up has left the station and if you're not on it by now you will never catch-up.

My site has visitors from all over the world and I challenge EVERYONE who recommends or walks around with a face mask, to post the scientific papers that they based their advice/decision on in the comment section below.

In case it wasn't obvious yet, the guy in the middle is Anthony Fauci, who has won the gold medal several times during what I have now come to call the Psychopath Olympics, a.k.a "COVID-19".

Fauci is one of the creatures who claim that it's absolutely essential for every person on the planet to wear a face mask and "socially distance" themselves from every other human being, and THIS is what he does when he thinks no one is looking. 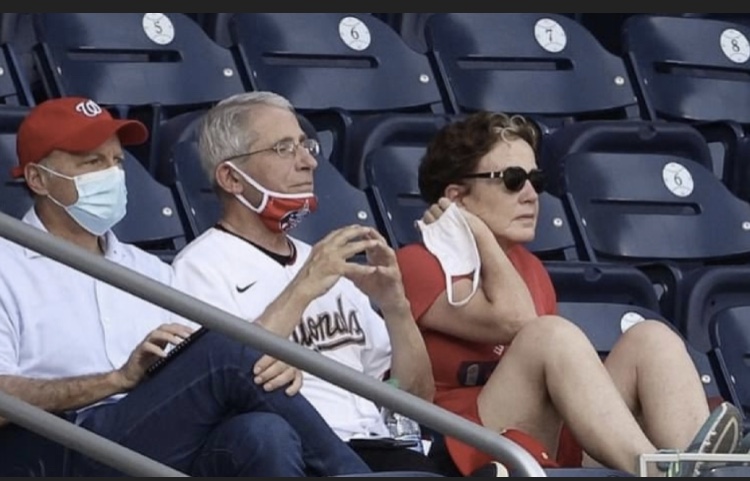 Don't think it's just Fauci, I promise you that this is what ALL the psychopaths who promote "COVID-19" do. You see, they KNOW "COVID-19" doesn't exist, they just want YOU to believe it does so they can roll out the Global Fascist/Surveillance agenda.

"COVID-19" is a television show, it doesn't exist in the real world.

No amount of handwashing, face masks, and "social distancing" will conjure it into existence. The people and creatures behind "COVID-19" are Satanists, so they turned the whole Operation into a ritual that you are an unwitting participant in.

Making you wash your hands every 2.9 seconds, but especially mask-wearing and social distancing are intended to program your mind to believe that there really is "a threat out there" (once again, THERE ISN'T) and to make you submit to their agenda. DON'T DO IT.

Their Operation/Ritual is going to fail when more and more people see "COVID-19" for what it is, a lie of gargantuan proportions, but that's all it is. A Lie.

Those who are neither stupid nor insane and see through the lie, are the Truly Powerful.

THIS is the topic that should be on the front page of every newspaper and discussed on every television and radio station every single day, but it's not.

THIS is what the massive global intelligence and surveillance apparatus should be used for, but it's not. ALL the perpetrators could be very easily located, tried and convicted, but they are not.

THIS is what every single person who holds a public office in ANY country should be investigating, but they are not.

The answers are given in the videos and documentaries below. Viewer discretion is advised.

Share this information with everyone you know because it's highly likely that "COVID-19" will also be used, as a pretext to take children out of their parental homes for "health and safety reasons".

Yes, that means they can come for YOUR child/children too. Don't think they won't.

This is a clip from the Highwire episode 'Blowing The Whistle on COVID-19'. You can watch the full episode in this post.

Article: Pure Evil: The Boys and Girls Being Sold for Sex Has Risen During COVID-19

The source of the video below, which I posted on February 22nd, 2021, was a Bitchute channel named Exposing Corruption. I found out today that this channel has been deleted from Bitchute, which means that Bitchute is apparently becoming YouTube2. If you find a broken link on my website don't panic! I have multiple copies of all videos so everything can be replaced.

Viewer discretion advised, but people need to wake up to what is being done to millions of children on a daily basis. There is NOTHING funny about pedophile child sex trafficking and satanic blood rituals.

This is an excerpt from Mark Passio's podcast episode 231, in which he shows in graphic detail how children are sexually abused and slaughtered in Satanic Rituals. Viewer Discretion Advised

Very wise words from the maker of this video:

If you can't trust government officials with your children, what can you trust them with?

The answer is of course: Nothing. What I found particularly interesting is the very short 2005 clip he used (starts at 2:22), in which U.S. Congresswoman Cynthia McKinney questioned then-Secretary of Defense Donald Rumsfeld over the Dyncorp scandals. Rumsfeld was Secretary of Defense at the time of 9/11 and he also has a professional background in the pharmaceutical and the tech industry. This is an excerpt from Rumsfeld's bio on the website of the U.S. Department of Defense:

From 1977 to 1985 he [Rumsfeld] served as Chief Executive Officer, President, and then Chairman of G.D. Searle & Co., a worldwide pharmaceutical company. The successful turnaround there earned him awards as the Outstanding Chief Executive Officer in the Pharmaceutical Industry from the Wall Street Transcript (1980) and Financial World (1981). From 1985 to 1990 he was in private business.

In her question, McKinney clearly states that Dyncorp, the company that was exposed for having been involved in the buying and selling of young women and children, was kept under contract by the U.S. Government for administering the smallpox and anthrax vaccines, and was then [in 2005] also working on a plague vaccine through the Joint Vaccine Acquisition Program.

"COVID-19" was planned YEARS ago and ALL major global events and scandals are linked together.

McKinney fails to mention however, that MK ULTRA survivor Cathy O’Brien stated in her testimony before Congress that Dick Cheney, George Bush Sr. and Bill Clinton indulged in human hunting. You can read more in the article on Cathy O'Brien's website titled Dick Cheney Unmasked.

If people don't start paying attention NOW and take a stand AGAINST the "COVID-19" laws and measures, the bat-sh*t-insane people behind "COVID-19" WILL be coming for the world's children next.

Also read and watch the updates in this article: Sex Crimes and The Vatican

An Open Secret – Pedophilia in Hollywood

Why Are So Many Children Going Missing?

The Church's Dark Secret – The Hidden Truth behind Child Abuse

Related: Sex Crimes and The Vatican

Also watch the movie Spotlight which is based on a true story.

The Satanic Connection to Missing Children