Graham Hancock is a best-selling author and journalist who specializes in ancient civilizations. In this documentary he explores, among other things, the submerged Yonaguni monument off the coast of Japan, Easter Island, Angkor Wat in Cambodia, and the pyramids of Egypt.

The ancient cultures that are discussed in this documentary series offer surprising perspectives on today’s most urgent questions: What purpose does society serve? 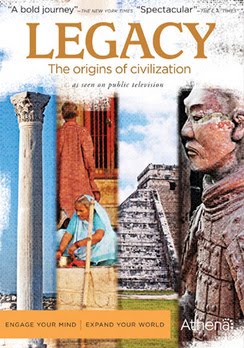 How can it survive and thrive within the limits of nature?

Journey to Iraq, where humans built the first cities and faced the first environmental crisis; to India, where a culture of spirituality flourished; to China, where ritual and respect for ancestors reflected ideas of cosmic harmony; to Egypt, where monuments to the dead promised stability and eternal life; to Central America, where the Aztecs and Maya carved out bloody empires; and to Western Europe, where the individual became the center of society.

In every locale, Legacy takes a fresh and still strikingly relevant look at the roots of civilization.

The 6 parts in this documentary series are:

Iraq – The Cradle Of Civilization: After thousands of years as a hunter/gatherer, man built the first cities 5,000 years ago on the banks of the Euphrates in Southern Iraq. Civilization began. City life transformed the human race with the ancient cultures of Mesopotamia such as Ur and Babylon.

India – The Empire Of The Spirit: Ancient India is with us today in the living tradition of the Hindu religion, the basis of Indian culture. The traditions that are honored by millions of Hindus in the present were born in the Indus valley 5,000 years ago.

China – The Mandate Of Heaven: Many breakthroughs on which the modern world is based were discovered in China long ago, some of which are iron-casting, gunpowder and even printing. After being introduced to Europe these inventions changed Western civilization. This episode presents the synthesis of East and West.

Egypt – The Habit of Civilization: Ancient Egypt was the first great nation on earth and endured for thousands of years. The god-like Pharaoh was the rock on which this civilization was built. Ancient traditions come together in the Moslem culture that is the Middle East today.

Central America – The Burden Of Time: Isolated from the rest of the world, the Mayans and Aztecs created sophisticated civilizations that in many ways paralleled ancient Mediterranean empires. God-like kings and a priestly ruling class dominated splendid cities of temples and pyramids.

The Barbarian West: Civilization arose in Asia but it was the West that would create the first world culture. This final episode traces the origins of Western culture to Greece and Rome prevailing, by borrowing from the legacies of the other old world civilizations.