The Obama speech is done. Those hypnotized by his lies ponder his message. The U.S. has the "authority" to attack ISIS/ISIL. 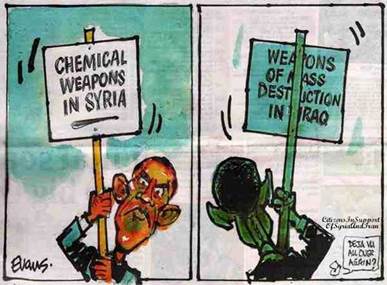 The U.S. will enter the sovereign nation of Syria without permission because apparently it doesn't need permission. The mass psychopathy is once again at an all time high. (Activistpost.com)

U.S. foreign policy is so fraudulent, predictable and repetitive that it almost renders it pathetic.

Yes, it's all been done before. In the next few weeks you will hear THE EXACT SAME RHETORIC that you heard before the war in Iraq.

Just replace Al Qaeda with ISIS/ISIL and presto!, there's your pretext for war.

It was only a few weeks ago that I posted this quote on the front page of the site:

"Beware the leader who bangs the drums of war in order to whip the citizenry into a patriotic fervor, for patriotism is indeed a double-edged sword. It emboldens the blood, just as it narrows the mind.

And when the drums of war have reached a fever pitch and the blood boils with hate and the mind has closed, the leader will have no need in seizing the rights of the citizenry. Rather, the citizenry, infused with fear and blinded by patriotism, will offer up all of their rights unto the leader and gladly so.

How do I know?

For this is what I have done. And I am Caesar."

The plan to invade Syria wasn't made "to resolve the ISIS crisis". It's been there for years! Here's The Plan as outlined by General Wesley Clark.

If you want to dig deeper into the mind of the psychopaths you should also read PNAC's Plan for U.S. Global Hegemony a.k.a Rebuilding America's Defenses.


Haven't you noticed that the so called "powers that be" are going absolutely bat-shit-insane (pardon my French) and are trying to start World War III in ANY way they can. Well, now you know why. Peace is not the plan.

Don't buy into it. They are once again trying to sell you war to "spread democracy" and "protect your freedom". Protect your freedom? I don't think so. In the truly Orwellian lingo of The New World Order "freedom" is the Patriot Act and the NSA spying on every aspect of your personal life.

Israel, Gaza, And The False Face Of Barack Obama

Uncovered: The Whole Truth About The Iraq War

The Business of War: SOFEX

The Business of War: How Federal And Private Military Contractors Profit From War