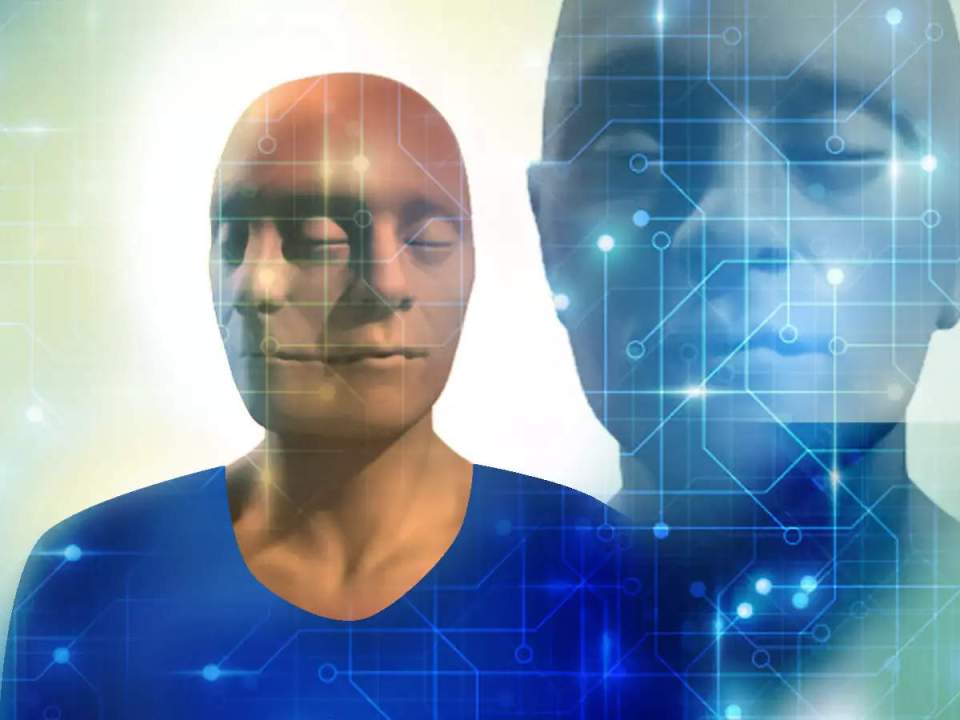 As I don't have any "COVID-19" updates planned for the site, I've thought of a new feature, namely DIY Research. The first article in this series, for those who are serious about educating themselves, is about Deep Fakes. The bottom line for DIY articles is that I know what the proposed subject matter is about, but I'm not going to tell you; you'll have to look into it yourself, hence DIY, Do It Yourself.

I've spent more than a decade and incalculable hours on research and writing for Be Brilliant, and I'm now pursuing other creative projects which also take up a LOT of my time.

The videos and links below are just to get you started. Deepfakes is a very important subject to study if you haven't done so yet.

Everybody Can Make Deepfakes Now!

Deepfake Videos Are Getting Terrifyingly Real

An example of highly advanced VFX: Disney's Jungle Book, 2016. As director Jon Favreau says in the video below: " The goal here is for people to not know what's real and what's not real." This statement can be applied to EVERYTHING you see, read, watch and hear in the world around you.

In Jungle Book 2016, the entire jungle and all the animals are digital creations. Other than the character Mowgli, nothing in the scenery of the movie is real.

Just so you can compare: this is what VFX looked like when CNN faked a Gulf War news broadcast in 1991. Do you really think they stopped doing it since then? If you do, there really is no hope for you.

CNN Fakes Gulf War coverage in 1991. You don't need a blue screen behind a reporter when he is ACTUALLY on location.

Watch this footage of "Pope Francis" disappearing into thin air on live television on April 13th, 2020. What you see in the video below is the exact same moment in time, recorded by two different cameras from two different angles. For more on the advancements in 3D Holographic Technology read the article listed below titled When Seeing and Hearing Isn't Believing. Once again, don't take my word for it, look it up yourself. Also check out this website: holotronica.com

The Vatican Uses A Hologram Pope

I've written about and given examples of predictive programming through television and movies, especially in the science fiction genre, in several other articles. If you've never "been into sci-fi", but you're wondering why it was so easy to predict the attempt of Big Tech and Big Pharma to literally take over the world, you should go back and watch how the public was warmed up for this agenda subconsciously through predictive programming decades ago. The image below is an IMDb review of The Outer Limits, but it also applies to the other series and movies that I will list below. 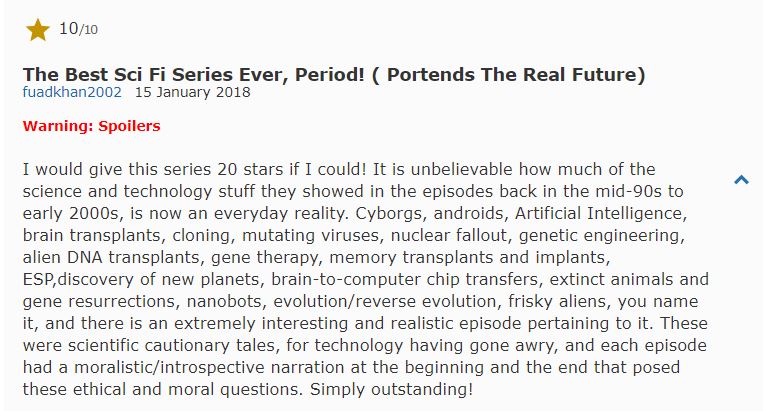 If you want to expand your mind, familiarize yourself with the unusual, and see what could lie ahead if humanity doesn't get its you-know-what together, get some popcorn and start catching up on what you've overlooked in the past 25+ years.

If you can't find these shows and movies on Netflix you can still find them online on sites like https://watchseries.mn. Don't forget to use an ad blocker on this site for pop-up and overlay ads. On some sites the ads open in a new tab or a new window so just ignore these too.

Not all of the IMDb reviews that I've linked to are as positive as the one that is mentioned above. Keep in mind that when most of these series and movies came out, people had no idea that the scientific concepts, technologies, and societal structures that are shown, could ever, ever become a reality. Recent developments have of course proven that truth is stranger than fiction. 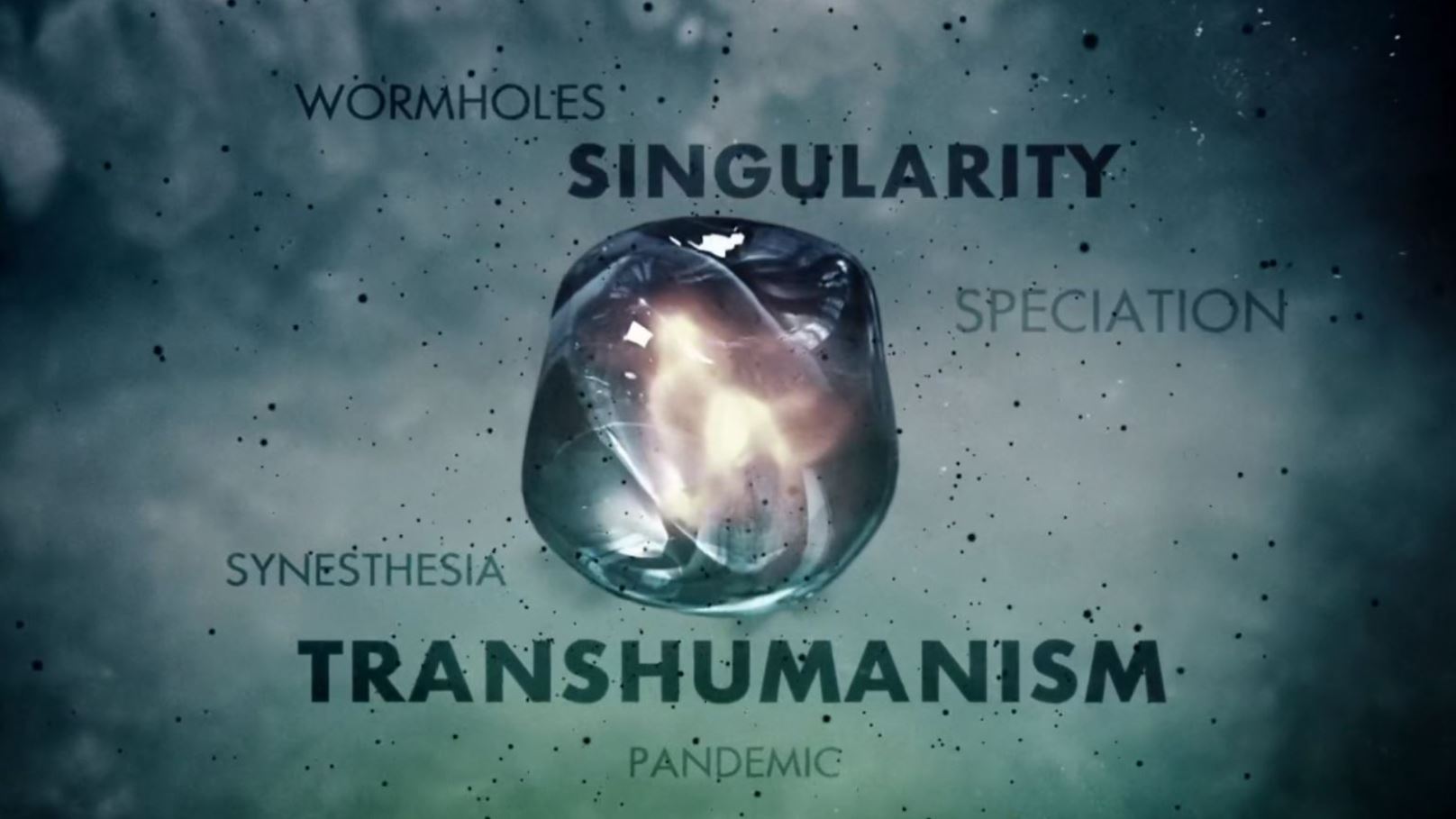 Also, notice the words that are used in the opening credits of season 5, and put them in the context of what is happening in the world today. That goes for all the episodes of season 5 actually. 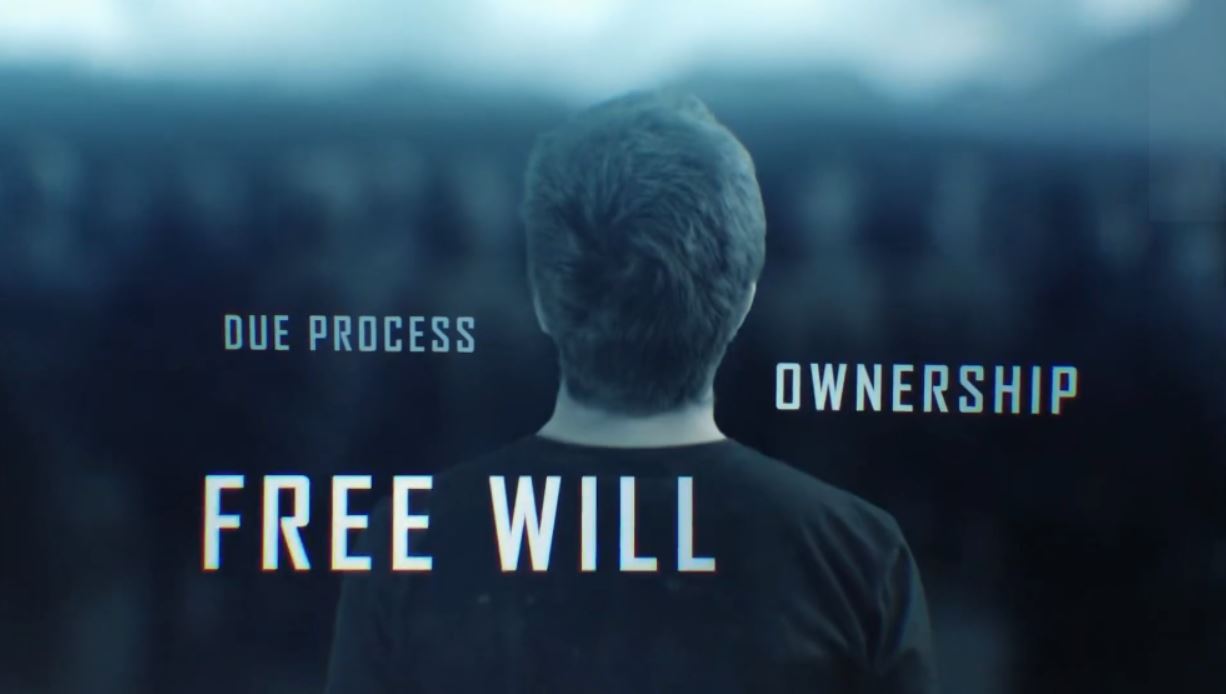 Survivors (2008-2010) Guess what this show is about: An unknown virus pandemic kills more than 90% of the world's population. Those immune must strive to survive and overcome the difficulties of this new world order, hoping that the virus will not mutate. Predictive Programming on steroids.

The Matrix – Part 1 (1999)  Needless to say why this is Number 1, but I'll list it here in case there is still someone on the planet who hasn't seen it yet.

Anon (2018) Imagine a world where privacy has been erased.

Transcendence (2014) Guess who makes a cameo appearance in the audience in the auditorium at 07:40 into this movie: Elon Musk. That's right, as in, Elon–SpaceX-already launched 4425 5G satellites into space to fry humanity and the planet-transhumanism architect pur sang-Musk. As I said, you'll have to do your own research but I'm pointing a few things out because they're easily overlooked. As with Fringe, there is a very important reason that these technology companies and individuals are so invested in certain areas of the science fiction, now science fact, genre.

If you want to be able to navigate through what lies ahead, you REALLY need to reevaluate your beliefs about what is and isn't possible in this world.

There has never been a time in human history when the ability to think intelligently and critically has been more important than it is now.

Related Articles on Be Brilliant

Why You Really Need To Stop Watching So Much Television

When Seeing and Hearing Isn't Believing

9/11: An In-Depth Study, No Conclusive Evidence Of Airplanes