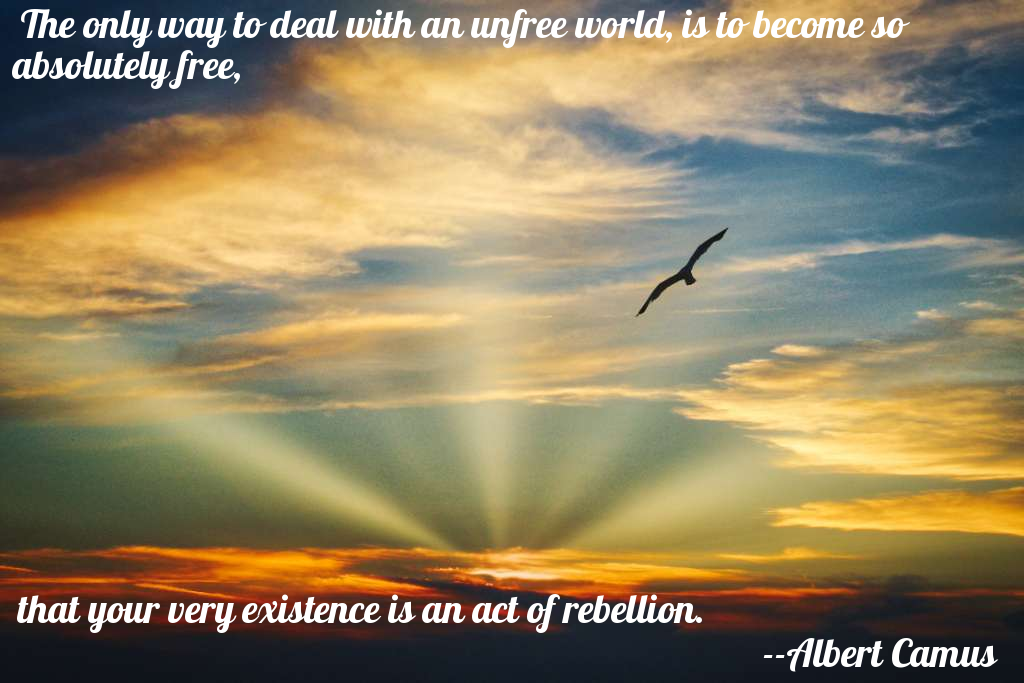 Are you a rebel? Unlike James Dean, you can be a rebel with a cause that involves helping humanity get elevated into a new conscious paradigm.

A better world doesn’t just happen. It’s a co-creative manifestation. To experience a shared reality that is one where everyone thrives, we need to go against the grain. Otherwise, things will continue to go down the path that psychopathic forces desire them to go.

You see it all around you these days. People are living in fear and are doing things that are irrational and causing consequences to themselves and others that are far worse than what they are afraid of. Those who don’t know who they are, seem to be losing a grip on reality and experiencing massive amounts of suffering that can appear as if they had psychosis. People are willing to do practically anything megalomaniacs tell them to do in order for them to be given back some semblance of what they consider to be normalcy.

“Just a few rebellious enlightened people around the world, and all the thrones of power will start shaking.” Osho was right. It doesn’t even take a lot of people rebelling against the sick and inverted matrix and paradigm that has been designed by psychopaths and created by unconscious participants in their dark fantasies. If we are to consider Dr. David Hawkins’ logarithmic levels of consciousness scale, someone calibrating at the consciousness of love, for example, can counterbalance millions of people calibrating at the consciousness of fear.

That brings us to an important point. Being a rebel who wants to help elevate and ascend human consciousness doesn’t involve anything that causes suffering. No thoughts, words, or actions causing any suffering exist. Fighting fire with fire only results in a blazing inferno. Besides, psychopaths will beat you at that game any day of the week. The key to, well, everything, is love.

When you do things that generate a larger heart field within you, your energy literally expands out, farther and farther, with greater strength and magnitude. Gautama Buddha’s auric field was said to be 100 miles wide. Imagine how many millions of people you could elevate by simply being a frequency anchor and embodying the consciousness of love, joy, or peace as much as possible. You don’t have to do anything except stay heart-centered.

By doing so, you’re not living in a fantasy. You are denying the infection of the delusion into your consciousness and energy field. You reject the fear that is used as a tool to manipulate you and twist your arm into agreeing to be a part of the psychopathic-led sickness. You embolden yourself with courage to be a free-thinker and free-feeler. You become a leader, a guide, that others can aspire to model. You become a luminary.

Visualize the World You Want to See

Visualize and imagine what an evolved human collective can be like. What will the physical society be like? What will the creative expression be like? How will people engage and interact with one another? What will they be doing with their time on this planet in this incarnation? How expanded will their awareness be and what will they be capable of? These, and other questions, and worthy of your exploration. You can get a better handle on how you can be a helper to humanity.

“The only way to deal with an unfree world is to become so absolutely free that your very existence is an act of rebellion.” French philosopher Albert Camus elegantly expressed how to be a rebel with a cause. There is no fighting or resistance required. You living in a way where you are liberated and sovereign will itself act as a sort of de facto resistance to the dysfunctional matrix control system even without your expressing that energy. It’s an energy hack that’s well worth exploring.

Being free, loving, happy, compassionate, and sovereign is all a state of being that is the biggest act of rebellion against a system that wants to desperately keep you away from being these things. Being young, wild, and free in your consciousness is a state of mind that doesn’t have to disappear when you get older. You keep the positive aspects of your youth and discard the unhelpful ones.

The younger you are, the closer you are to what you were prior to your incarnation and transposition of energy down into this incredibly dense dimension. Connect more with it to remember who you are.

Spend more of your time and energy focusing on and consuming inspiring content.

Get regressed using modalities like Beyond Quantum Healing hypnotherapy.

Stop going along with what unconscious people are doing.

Meditate and connect with your higher/soul self.

Do anything that expands your heart field.