Once upon a time, Goldman Sachs shunned publicity. During the period from 1930 to 1969, Sydney Weinberg ran Goldman Sachs where he developed a staunch corporate cultural aversion to publicity.  During the 1970s, a tandem of John Weinberg and John Whitehead assumed the reigns of leadership at Goldman Sachs.  Whitehead left the company in 1984 to enter public life.  John Weinberg carried on in the same vein as his father Sydney – shunning publicity – to the point where he hired a man to keep his name and his firm's out of the press.  He kept him off the full-time payroll (though he sat full-time at a desk in head office) so that if, improbably, a comment did slip out, it could be honestly dismissed as not coming from a Goldman Sachs employee.  John Weinberg served as sole senior partner and chairman until 1990.  His mantra was to put the client’s interests first and he wouldn’t allow Goldman to be involved in hostile takeovers.

The culture at Goldman Sachs dramatically changed in 1990 when operational control of the firm was ceded to Robert Rubin and Stephen Friedman.  This tandem became the Co-Senior Partners in 1990 and refocused the firm on globalization and strengthening the Merger & Acquisition and Trading business lines.

Since this cultural shift in 1990, Goldman, its employees and alumni have been attracting HEAPS of public attention – much of it unflattering – owing to allegations and/or public perceptions of frontrunning, government patronage/favoritism, and conflict of interests with clients.  As the following biographical sketches attest – Goldman Sachs has become not only a world-renowned financial juggernaut but also highly influential in areas that transcend finance. 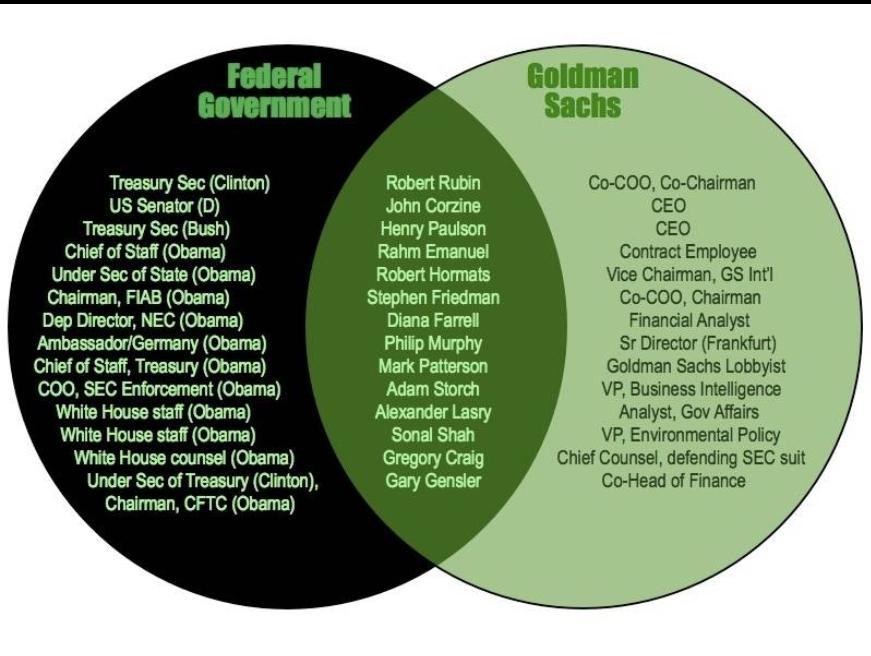 John Whitehead – Had a 38-year career at Goldman Sachs – he retired in 1984 as Co-Chairman and Co-Senior Partner. He served as United States Deputy Secretary of State in Ronald Reagan's administration from 1985 to 1989 under George Shultz and was awarded the Presidential Citizens Medal by President Reagan. In 1996, he was the campaign chairman for Michael Benjamin who ran for a seat in New York's 8th congressional district.  He is former Chairman of the Board of the Federal Reserve Bank of New York, the United Nations Association, and a former Chairman of The Andrew W. Mellon Foundation and the Harvard Board of Overseers. He is a former director of the New York Stock Exchange and Chairman Emeritus of The Brookings Institution.

Robert Rubin – served as the 70th United States Secretary of the Treasury during both the first and second Clinton administrations. Before his government service, he spent 26 years at Goldman Sachs serving as a member of the Board, and Co-Chairman from 1990-1992.

Henry Paulson – as the 74th United States Treasury Secretary. He previously served as the Chairman and Chief Executive Officer of Goldman Sachs.

John Thain – The last chairman and chief executive officer of Merrill Lynch before its merger with Bank of America.  Before he came to Merrill, Thain was the CEO of the New York Stock Exchange from January 2004 to December 2007. He also worked at Goldman Sachs, as head of the mortgage desk from 1985 to 1990, and president and co-chief operating officer from 1999 to 2004.

Robert Steel – Served as Under Secretary for Domestic Finance of the United States Treasury from 2006-08. He has also served as president and CEO of Wachovia Corporation and as vice-chair of Goldman Sachs.

Edward Liddy – Was on the board of Goldman Sachs from 2003 to 2008, when he resigned to become CEO of AIG. He was selected by Henry Paulson for both roles.

Reuben Jeffrey – Had an 18-year career at Goldman, left in 2001 when President Bush appointed him as his Special Advisor on Lower Manhattan Development, and in 2002, Jeffery left Goldman Sachs to take on this responsibility. In 2003, Jeffery became a Special Advisor to L. Paul Bremer, head of the Coalition Provisional Authority in Iraq, and then became the Representative and Executive Director of the Coalition Provisional Authority Office in The Pentagon. He served as a member of the United States National Security Council until 2005, as a Senior Director responsible for International Economic Affairs.  Jeffery was named the chairman of the Commodity Futures Trading Commission.  On April 16th, 2007, President Bush nominated Jeffery as Under Secretary of State for Economic, Business, and Agricultural Affairs.

Rahm Emanuel – Current White House Chief of Staff [Obama], was originally hired by Bill Clinton as his chief fundraiser.  At that time [1992] Emanuel was on the payroll of Goldman Sachs, receiving $3,000 per month from the firm to "introduce us to people" according to a Goldman partner.

Gerald Corrigan –  Was a special Assistant to Federal Reserve Board Chairman, Paul Volcker in Washington, D.C. He went on to serve as president of the Federal Reserve Bank of Minneapolis from 1980 to 1984 and President of the Federal Reserve Bank of New York from 1985 until 1993.  From 1991 to 1993 he was Chairman of the Basel Committee on Banking Supervision. From 1993 to 1995 he was director of the Council on Foreign Relations.  Dr. Corrigan is currently a partner and managing director in the Office of the Chairman at Goldman Sachs and was appointed chairman of GS Bank USA, the bank holding company of Goldman Sachs, in September 2008. He is also a member of the Group of Thirty, an influential international body of leading financiers and academics.

Duncan Niederauer – Was appointed chief executive officer and director of NYSE Euronext, effective December 1, 2007, after joining NYSE Euronext in April 2007 as a member of the Management Committee. Mr. Niederauer also serves on the boards of NYSE Group and Euronext N.V. Mr. Niederauer was previously a partner at The Goldman Sachs Group, Inc. (United States) (GS) where he held many positions, among them, co-head of the Equities Division execution services franchise and the managing director responsible for Goldman Sachs Execution & Clearing, L.P. (formerly known as Spear, Leeds & Kellogg L.P.). Mr. Niederauer joined GS in 1985. From March 2002 until his resignation in February 2004, Mr. Niederauer also served on the board of managers of Archipelago Holdings, LLC (United States).

Lawrence Summers – Director of the White House's National Economic Council for President Barack Obama and former Secretary of the U.S. Treasury [Clinton]..  In 2008, Summers was paid 135,000 for giving a speech to Goldman executives.

Jon Corzine – Served five years of a six-year Senate term before being elected Governor in 2005. He was defeated for re-election in 2009 by Republican Chris Christie.  Former Chairman and co-CEO of Goldman Sachs.  Left firm in 1998 and entered politics.

Gary Gensler – Chairman of the U.S. Commodity Futures Trading Commission [CFTC] under President Barack Obama.  Gary Gensler spent 18 years at Goldman Sachs, making partner when he was 30, becoming head of the company’s fixed income and currency trading operations in Tokyo by the mid-’90s.

Robert Zoellick – Is the eleventh president of the World Bank, a position he has held since July 1, 2007. He was previously a managing director of Goldman Sachs, United States Deputy Secretary of State (resigning on July 7, 2006) and U.S. Trade Representative from February 7th, 2001, until February 22, 2005.

Neel Kashkari – In July 2006, Kashkari was appointed as a special assistant to Treasury Secretary Henry Paulson. In the summer of 2008, he was appointed assistant secretary for international economics and was confirmed in that post by the U.S. Senate. On October 6, 2008, Paulson named Kashkari interim head of the new Office of Financial Stability. Overseen by the treasury secretary, he is in charge of creating and implementing the United States government's $700 billion financial stabilization program.  Prior to joining the Treasury Department, Kashkari was a Vice President at Goldman, Sachs & Co. in San Francisco.

Mario Draghi – Head of the Bank of Italy and former mentor to current U.S. Treasury Secretary, Tim Geithner.  Draghi was vice-chairman and managing director of Goldman Sachs International and a member of the firm-wide management committee (2002-2005).

Mark Carney – Governor of the Bank of Canada.  Before joining the public service, Carney had a thirteen-year career with Goldman Sachs in its London, Tokyo, New York and Toronto offices.