A treatise by Friedrich Nietzsche, written in four parts and published in German between 1883 and 1885 as "Also Sprach Zarathustra". The work is 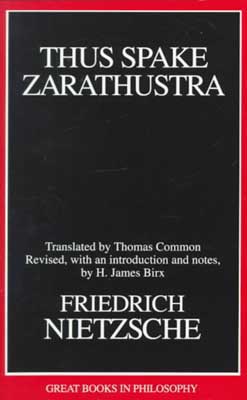 incomplete, but it is the first thorough statement of Nietzsche's mature philosophy and the masterpiece of his career. It received little attention during his lifetime but its influence since his death has been considerable, in the arts as well as philosophy.

Written in the form of a prose narrative, Thus Spake Zarathustra offers the philosophy of its author through the voice of Zarathustra (based on the Persian prophet Zoroaster) who, after years of meditation, has come down from a mountain to offer his wisdom to the world. It is this work in which Nietzsche made his famous (and much misconstrued) statement that "God is dead" and in which he presented some of the most influential and well-known (and likewise misunderstood) ideas of his philosophy, including those of the Ubermensch ("overman" or "superman") and the "will to power."

Nietzsche's vision of the "Superman" (der Ubermensch) is at the center of this book, and Nietzsche gives a perfect description of his vision and what it will incorporate and help to abolish. It soon becomes clear that Nietzsche's Superman would be mentally strong rather than purely physically.

The amount of metaphors that Nietzsche uses is immense and he beautifully illustrates all his main points without a single drawing. This is a brilliant masterpiece and whether or not you agree with every point that Nietzsche makes (and few do), you will still be able to appreciate the beautiful poetry. And still, however much you may disagree, this book is thought-provoking and may turn your entire world upside down.