Increasingly science agrees with the poetry of direct human experience:  we are more than the atoms and molecules that make up our bodies, but 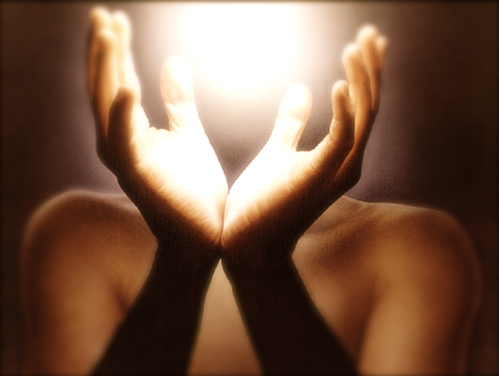 beings of light as well. Biophotons are emitted by the human body, can be released through mental intention, and may modulate fundamental processes within cell-to-cell communication and DNA.

Nothing is more amazing than the highly improbable fact that we exist. We often ignore this fact, oblivious to the reality that instead of something there could be nothing at all, i.e. why is there a universe (poignantly aware of itself through us) and not some void completely unconscious of itself?

Consider that from light, air, water, basic minerals within the crust of the earth, and the at least 3 billion-year-old information contained within the nucleus of one diploid zygote cell, the human body is formed, and within that body a soul capable of at least trying to comprehend its bodily and spiritual origins.

Given the sheer insanity of our existential condition and bodily incarnation as a whole, and considering that our earthly existence is partially formed from sunlight and requires the continual consumption of condensed sunlight in the form of food, it may not sound so farfetched that our body emits light.

Indeed, the human body emits biophotons, also known as ultraweak photon emissions (UPE), with a visibility 1,000 times lower than the sensitivity of our naked eye. While not visible to us, these particles of light (or waves, depending on how you are measuring them) are part of the visible electromagnetic spectrum (380-780 nm) and are detectable via sophisticated modern instrumentation.[1] [2]

The eye itself, which is continually exposed to ambient powerful photons that pass through various ocular tissues, emit spontaneous and visible light-induced 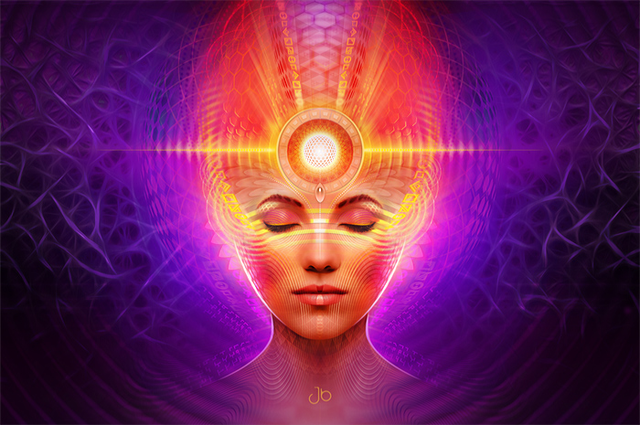 ultraweak photon emissions.[3] It has even been hypothesized that visible light induces delayed bioluminescence within the exposed eye tissue, providing an explanation for the origin of the negative afterimage.[4]

These light emissions have also been correlated with cerebral energy metabolism and oxidative stress within the mammalian brain.[5] [6] And yet, biophoton emissions are not necessarily epiphenomenal. Bókkon’s hypothesis suggests that photons released from chemical processes within the brain produce biophysical pictures during visual imagery, and a recent study found that when subjects actively imagined light in a very dark environment their intention produced significant increases in ultraweak photo emissions.[7] This is consistent with an emerging view that biophotons are not solely cellular metabolic by-products, but rather because biophoton intensity can be considerably higher inside cells than outside, it is possible for the mind to access this energy gradient to create intrinsic biophysical pictures during visual perception and imagery.[8]

Our Cells and DNA Use Biophotons To Store and Communicate Information

Apparently, biophotons are used by the cells of many living organisms to communicate, which facilitates energy/information transfer that is several orders of magnitude faster than chemical diffusion. According to a 2010 study, “Cell to cell communication by biophotons have been demonstrated in plants, bacteria, animal neutrophil granulocytes, and kidney cells.”[9] Researchers were able to demonstrate that “…different spectral light stimulation (infrared, red, yellow, blue, green and white) at one end of the spinal sensory or motor nerve roots resulted in a significant increase in the biophotonic activity at the other end.” Researchers interpreted their findings to suggest that “…light stimulation can generate biophotons that conduct along the neural fibers, probably as neural communication signals.”

Even when we go down to the molecular level of our genome, DNA can be identified to be a source of biophoton emissions as well. One author proposes that DNA is so biophoton dependent that it has excimer laser-like properties, enabling it to exist in a stable state far from thermal equilibrium at threshold.[10]

Technically speaking a biophoton is an elementary particle or quantum of light of non-thermal origin in the visible and ultraviolet spectrum emitted from a biological system. They are generally believed to be produced as a result of energy metabolism within our cells, or more formally as a “…by-product of biochemical reactions in which excited molecules are produced from bioenergetic processes that involve active oxygen species,”  [11]

Because the metabolism of the body changes in a circadian fashion, biophoton emissions also variate along the axis of diurnal time. [12]  Research has mapped out distinct anatomical locations within the body where biophoton emissions are stronger and weaker, depending on the time of the day:

Generally, the fluctuation in photon counts over the body was lower in the morning than in the afternoon. The thorax-abdomen region emitted the lowest and most constant. The upper extremities and the head region emitted most and increasingly over the day. Spectral analysis of low, intermediate, and high emission from the superior frontal part of the right leg, the forehead, and the palms in the sensitivity range of the photomultiplier showed the major spontaneous emission at 470-570 nm. The central palm area of hand emission showed a larger contribution of the 420-470 nm range in the spectrum of spontaneous emission from the hand in autumn/winter. The spectrum of delayed luminescence from the hand showed major emission in the same range as spontaneous emission.

The researchers concluded that “The spectral data suggest that measurements might well provide quantitative data on the individual pattern of peroxidative and anti-oxidative processes in vivo.”

Research has found an oxidative stress-mediated difference in biophoton emission among meditators versus non-meditators. Those who meditate regularly tend to have lower ultra-weak photon emission (UPE, biophoton emission), which is believed to result from the lower level of free radical reactions occurring in their bodies. In one clinical study involving practitioners of transcendental meditation (TM) researchers found:

The lowest UPE intensities were observed in two subjects who regularly meditate. Spectral analysis of human UPE has suggested that ultra-weak emission is probably, at least in part, a reflection of free radical reactions in a living system. It has been documented that various physiologic and biochemical shifts follow the long-term practice of meditation and it is inferred that meditation may impact free radical activity.[13]

Interestingly, an herb well-known for its use in stress reduction (including inducing measurable declines in cortisol), and associated heightened oxidative stress, has been tested clinically in reducing the level of biophotons emitted in human subjects.  Known as rhodiola, a study published in 2009 in the journal Phytotherapeutic Research found that those who took the herb for 1 week has a significant decrease in photon emission in comparison with the placebo group.[14]

Human Skin May Capture Energy and Information from Sunlight 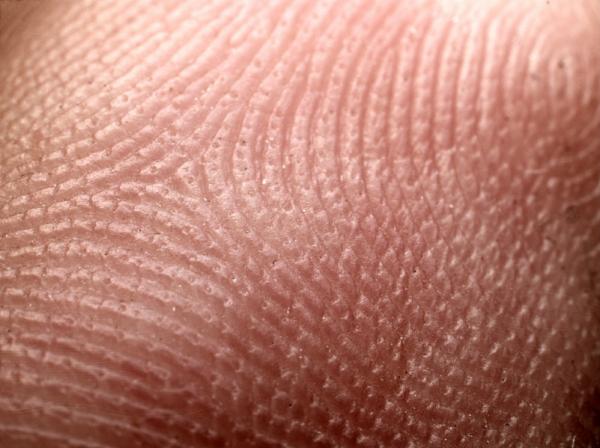 radiation. A study published in the Journal of Photochemistry and Photobiology in 1993, titled, “Artificial sunlight irradiation induces ultraweak photon emission in human skin fibroblasts,” discovered that when light from an artificial sunlight source was applied to fibroblasts from either normal subjects or with the condition xeroderma pigmentosum, characterized by deficient DNA repair mechanisms, it induced far higher emissions of ultraweak photons (10-20 times) in the xeroderma pigmentosum group.  The researchers concluded from this experiment that “These data suggest that xeroderma pigmentosum cells tend to lose the capacity of efficient storage of ultraweak photons, indicating the existence of an efficient intracellular photon trapping system within human cells.“[15]  More recent research has also identified measurable differences in biophoton emission between normal and melanoma cells.[16]

In a previous article, Does Skin Pigment Act Like A Natural Solar-Panel, we explored the role of melanin in converting ultraviolet light into metabolic energy:

Melanin is capable of transforming ultraviolet light energy into heat in a process known as “ultrafast internal conversion”; more than 99.9% of the absorbed UV radiation is transformed from potentially genotoxic (DNA-damaging) ultraviolet light into harmless heat.

If melanin can convert light into heat, could it not also transform UV radiation into other biologically/metabolically useful forms of energy? This may not seem so farfetched when one considers that even gamma radiation, which is highly toxic to most forms of life, is a source of sustenance for certain types of fungi and bacteria.

It appears that modern science is only now coming to recognize the ability of the human body to receive and emit energy and information directly from the light given off from the Sun. [17]

There is also a growing realization that the Sun and Moon affect biophoton emissions through gravitational influences. Recently, biophoton emissions from wheat seedlings in Germany and Brazil were found to be synchronized transcontinentally according to rhythms associated with the lunisolar tide.[18]  In fact, the lunisolar tidal force, to which the Sun contributes 30% and the Moon 60% of the combined gravitational acceleration, has been found to regulate a number of features of plant growth upon Earth.[19]

Intention Is a Living Force of Physiology

Even human intention itself, the so-called ghost in the machine, may have an empirical basis in biophotons.

A recent commentary published in the journal Investigacion clinica titled “Evidence about the power of intention” addressed this connection:

Intention is defined as a directed thought to perform a determined action. Thoughts targeted to an end can affect inanimate objects and practically all living things from unicellular organisms to human beings. The emission of light particles (biophotons) seems to be the mechanism through which an intention produces its effects. All living organisms emit a constant current of photons as a means to direct instantaneous nonlocal signals from one part of the body to another and to the outside world. Biophotons are stored in the intracellular DNA. When the organism is sick changes in biophotons emissions are produced. Direct intention manifests itself as an electric and magnetic energy producing an ordered flux of photons. Our intentions seem to operate as highly coherent frequencies capable of changing the molecular structure of matter. For the intention to be effective it is necessary to choose the appropriate time. In fact, living beings are mutually synchronized and to the earth and its constant changes of magnetic energy. It has been shown that the energy of thought can also alter the environment. Hypnosis, stigmata phenomena, and the placebo effect can also be considered as types of intention, as instructions to the brain during a particular state of consciousness. Cases of spontaneous cures or of remote healing of extremely ill patients represent instances of an exceedingly great intention to control diseases menacing our lives. The intention to heal as well as the beliefs of the sick person on the efficacy of the healing influences promote his healing. In conclusion, studies on thought and consciousness are emerging as fundamental aspects and not as mere epiphenomena that are rapidly leading to a profound change in the paradigms of Biology and Medicine.

So there you have it. Science increasingly agrees with direct human experience: we are more than the atoms and molecules of which we are composed, but beings that emit, communicate with and are formed from light.