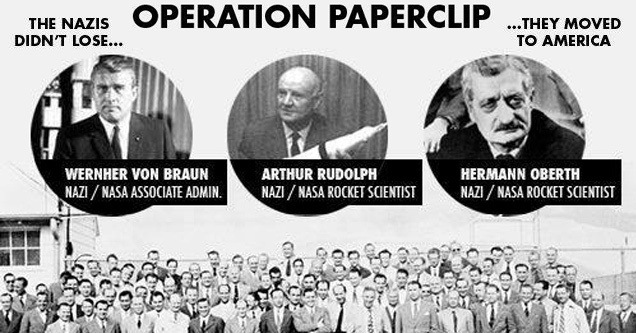 This is a very interesting video recorded at the Politics & Prose bookstore in Washington, D.C., in which author Annie Jacobsen discusses her book Operation Paperclip. She also takes questions and is heckled by someone in the audience, who claims that some of her material wasn't properly "fact-checked". The heckler seems to have been intentionally put there to discredit her work, but you can rest assured that what Annie Jacobsen shows in this presentation are historical facts that have been extremely well documented.

In a covert affair originally dubbed Operation Overcast but later renamed Operation Paperclip, roughly 1600 German scientists (along with their families) were brought to the United States to work on America’s behalf after World War II. The program was run by the newly-formed Joint Intelligence Objectives Agency (JIOA), whose goal was to harness German intellectual resources to help develop America’s arsenal of rockets and other biological and chemical weapons, and to ensure such coveted information did not fall into the hands of the Soviet Union.

Although he officially sanctioned the operation, President Harry Truman forbade the agency from recruiting any Nazi members or active Nazi supporters. Nevertheless, officials within the JIOA and Office of Strategic Services (OSS)—the forerunner to the CIA—bypassed this directive by eliminating or whitewashing incriminating evidence of possible war crimes from the scientists’ records, believing their intelligence to be crucial to the country’s postwar efforts. (see What Was Operation Paperclip?)

So, in short, the Nazi ideology didn't die when World War II ended. It was literally exported through former Nazi scientists and other Nazi officials to the USA and other countries of the world, where it was covertly -but is more and more overtly- held alive. Wake up people!